As the sixth largest city in Canada, Mississauga is located just 30 minutes away from Toronto. There are a number of ways to enjoy this amazing city whether you love to take in nature and visit the waterfront or enjoy a great day of shopping at Square One Shopping Centre. You’ll also love the festivals that take place year-round and the quick and easy access to Pearson International Airport. There are many reasons why a buyer would seek a condo in Mississauga!

Shopping is easy at Square One where you’ll find grocery stores, restaurants, and cafés along with a number of service and retail providers. Throughout Mississauga, you’ll also have access to a wide variety of other shopping outlets. With dozens of head offices located in Mississauga, you’ll experience the undeniable vibe of prosperity in the local area. This is a city that has experienced phenomenal growth throughout the years and making a condo purchase here not only provides you with a great place to live but a fantastic investment opportunity as well.

Good Schools? Shopping at Square One? Waterfront Living? Mississauga has the best places to live.

Go beyond shopping, the second largest skyline and most thriving urban centre outside of Toronto. 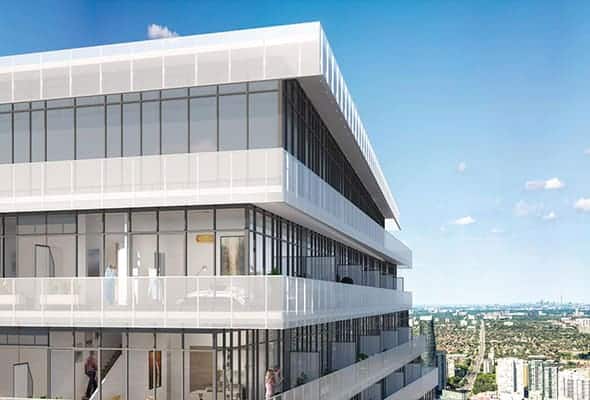 The most charming waterfront in the GTA, Luxury Living, Parks, Trails and views are all at your doorstep

With so many different condos and neighbourhoods to choose from, you’ll have plenty of options when it’s time to narrow down your selection for new Mississauga developments.

View all Mississauga Condos at Square One, Erin Mills, Lakeshore and Hurontario.

If you love fine dining you’ll be amazed at the selection of restaurants in the city. Many people from Toronto head out to Mississauga to enjoy an evening dinner. If you are looking for green spaces, take a stroll through the intersecting paths winding through Community Commons Park and Scholar’s Green or take a stroll along the lakeside.

There is an art gallery and as you walk through the parks you’ll notice art pieces that add a dash of culture to these expansive green spaces.

You can also visit the Living Arts Centre to enjoy this accessible and dynamic gathering place for individual and group creativity. More than 400,000 people walk through the doors annually to watch theatre performances, take courses or enjoy events. Find out more about condo living in Mississauga by booking your tour of Mississauga condo developments.. We assemble the new condominium developments Mississauga that are being built in a convenient list and provide full details about each one of them. Our site is a one-stop-shop for condo shopping through the Internet in the comfort of your own home.

Mississauga has grown into its own unique city within the last 30 years. It wasn’t too long ago when Mississauga was considered to be a subculture of Toronto but it has found a place of its own and has become a city amongst giants and a great place to live. It boasts new condominium developments that are under construction and they can be found from one end of the city to the other.

The city is currently home to more than 721,500 residents and it’s expected that by 2031 more than 812,000 people will be calling Mississauga home.

This is the city that will be leading us forward into the beginning of the 21st-century with its business and high-tech advancements that have become a leading feature of the city. Mississauga is both modern and young, which gives it a vibrant lifestyle. It’s a great place for young people to call home since it provides a variety of amenities. Boredom is not a part of the culture in this city with events and activities being held every day of the year across the city. As an added bonus, it also has its special green areas and its magnificent lakeside that provides serenity and a place to connect with nature.

What new condos are coming soon in Mississauga in 2021?

How long does it take for a condo to complete in Mississauga?

On Average, a high rise condo 20-60 storeys can take anywhere from 3-5 years. Depending on the status of the development and approval process we’ve seem most condos complete in 4 years.

How many new condos projects currently available for sale at Square One, Mississauga in 2021?
The number of condos have increased in 2021 are currently, 4 New developments in the Square One area in Mississauga. Voya Condos at Parkside Village, M4 at M City, Oro at Edge Towers and Exchange District 3.
What is the best area to live in a condo in Mississauga?

There are 3 main neighbourhoods with a large condominium community. Square One, Erin Mills and Port Credit.

How much are 1 bedroom condos in Mississauga in 2021?

How much are 2 bedroom condos in Mississauga in 2021?

It might be surprising to some, but Mississauga is Canada’s sixth largest city. Conveniently located in Southern Ontario on the beautiful waterfront of Lake Ontario, it is just a short a 30-minute drive from downtown Toronto. Mississauga is also fully serviced by public transit and GO trains, which makes it perfect for business or work commute.

Travel often? Pearson International Airport is just 20 minutes away. This is what we call convenience. There has never been a better time to living and invest in Mississauga. The city is rapidly growing and with the steady increase of real estate prices in Toronto, Mississauga Condos become even more attractive as thousands start to call Mississauga their new home. You will always discover something new and exciting when living in Mississauga.

Over 1,200 restaurants will open their doors to you showcasing cuisines from over 100 countries. What a better way to spend a weekend than indulge in a little shopping experience at the famous Square One Shopping Centre. Not a fan of shopping? Hundreds of parks, ravines and trails are within a few minutes of one another. Walk along or fish at the lakeshore, then take in some of the city’s fabulous theatre, entertainment, and nightlife at the Living Arts Centre. There are even more things to do in winter! Skating and cross country skiing is also available during the winter months in the parks, ravines and dedicated areas. Looking for something to do indoors? Entertain the whole family at top attractions like Playdium and SkyZone Indoor Trampoline Park.

Mississauga is booming! Thousands move here once they decide to invest in a Mississauga condo development – and there is a reason for it. Just in the last few years, Mississauga went from a sleepy suburb to a full fledge bustling city with its own multicultural vibe.

While Mississauga offers its’ residents a small-town feel with a variety of things to do, the city, itself, has experienced steady economic growth and offers plenty of economic possibilities as well.

This city is home to more than 18,000 companies ranging from corporate head offices and industrial branch operations to corner store retail businesses, and including 50 of Canada’s Fortune 500. There is absolutely no shortage of great companies to work at and people to serve as a business.

However, while developing great Mississauga condo projects, the city is not only expanding, improving and modernizing transportation and architecture, it is also not losing its natural beauty and small-town charm.

Mississauga is developing and growing faster than anyone could have expected as more and more people look into investing in Mississauga condos and calling this charming city their new home.

Getting in and out of Mississauga

One of the reasons to invest in one of the Mississauga condos is the fact that Mississauga is in one of the best strategic locations possible for employees, business owners, business and personal travelers. Linked with 6 major highways, including Highway 401, 403, 407, 409, 410, 427 and QEW easily taking you to anywhere between Quebec and United States.

Mississauga is on three major railways, which conveniently allows you to travel quickly to Downtown Toronto, International Airport, and even Quebec City. There are plans to link Mississauga with Niagara Falls by train as well in the near future.

Bus service is impressive as well. Mississauga is well connected via Go Transit Bus system as well as Mississauga Transit, called MiWay, which provide easy access around the city, to all colleges and universities in and around Toronto as well as neighbouring cities such as Brampton and Oakville.

Mississauga’s population has grown to well over 750,000 residents making the city one of the Canada’s largest cities and one of the best places to invest as Mississauga condo projects gain more and more popularity.

Mississauga became one of the most diverse and popular cities around Toronto. With easy access to Toronto for work or business as well as just 15-20 minute drive to Pearson International Airport – location couldn’t be better.

Mississauga has something to offer for everyone. From great restaurants, shopping, entertainment, nature, and lakeshore – no matter what your idea of a perfect day out is, you will find something to keep you entertained in Mississauga.